"And you thought slimes couldn't get any more awesome"

Party Gordos are gordo slimes that appear somewhere on the Far, Far, Range every Friday and stay until Monday. During this weekend period, you can also find slime ornaments, which are small orbs with the face of a slime on them.

The Party Gordo looks similar to a pink slime, except for the fact that it is wearing a party hat and star-shaped sun glasses. It sways back and forth, dancing to the music that starts playing when you come near.

When you feed it enough to make it burst, it will leave a bunch of boxes filled with slime ornaments, and even some special ones like the rainbow and Party Gordo ornaments. It will also leave a few pink slimes that wear the same party attire as the gordo. Until you suck them up into your Vac-pac, that is. Once you do that, they will become normal pink slimes. 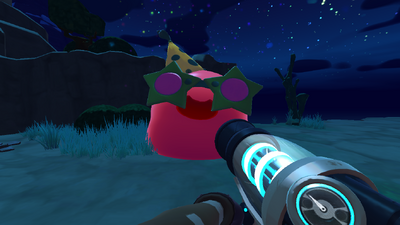